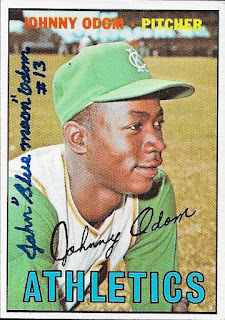 Here is a really great TTM success that I got recently from John "Blue Moon" Odom.  On a 1967 Topps, Odom's signature looks really awesome.  I also like how he signed it up the side of the card, as opposed to across the card.  Add in that his signature is so compact and neat, you just don't see that any more.  I also like the KC A's jersey that Odom is wearing.  This card really turned out nice.