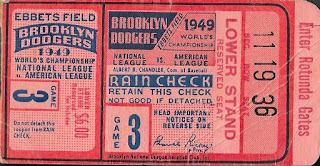 Recently, I used some of the Christmas money that I got from my grandma to pick up something that he has some ties to.  I was able to find a used ticket stub to Game 3 of the 1949 World Series.  A while back, I posted on here about how Grandma had dropped a bombshell on me when she told me that she had attended a World Series game.  You can read the story here.

Since Grandma didn't keep her ticket, I figured I would see about finding one that would go with the story.  I know it's not her original ticket, but I still think it is cool to be able to have a ticket from that World Series and be able to tell folks that she was there. 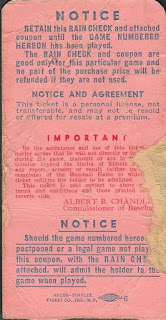 This ticket stub is in pretty rough shape, but I got a nice deal on it.  I tried to get the guy who had it for sale to accept a BIN price, but even though it failed to sell at his opening bid price three times, he still re-listed it for me in auction style, for that price.  Unsurprisingly, no one but me bid on it, so I came away with the ticket at the guy's opening bid.  Oh well.  BIN would have been quicker.

I now have two World Series tickets.  This one, and the one I for from Mr. McNair for the 1930 World Series.  I don't believe I will be starting a World Series ticket collection, I just think they are cool.  I may pick up some Orioles ones, but I haven't decided yet.  I'm still excited to finally have a ticket from the World Series that Grandma attended.
Posted by William Regenthal at 9:18 PM