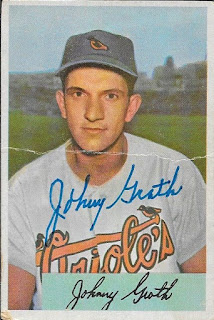 I have tried to keep the second or multiple TTM requests from players to a minimum.  I don't want to feel like I am taking advantage of any system, but sometimes I think I need to send a few players multiple requests.  Some of which were guys that I got in the past on baseballs who I would like to see in my album.  Others are guys who I mailed to, then saw a card I liked and felt compelled to send again.

This Johnny Groth is one that I got from a friend and really wanted to get it signed.  I didn't have any signed 1954 Bowman and I wanted an Oriole from that set.

I got the card from my friend, Jeff, and he pointed out to me that all of the Orioles jerseys from 1954 Bowman were airbrushed by different artists.  This is why you see the faux pas of the misplaced apostrophe on the jersey.

Groth charges per auto, so I didn't feel bad sending a second request.  Actually, if a guy charges, I am totally cool with sending a few requests.  Not because I don;'t like that they charge, but because I understand an older player like Groth who is in his 90s, is on a fixed income.