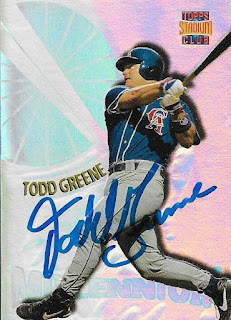 It took two attempts, but I got a TTM success from former catcher, Todd Greene.  This was a request I really wanted to push, because I had so many cool cards of Greene that I wanted to see come back signed.  This 1997 Stadium Club Millennium card was one that I really was excited about when I picked it up from the LCS.  The card looks great; even better in person! 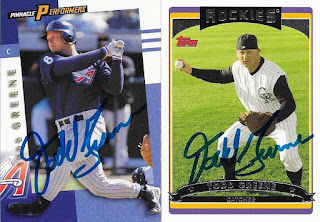 I liked the old Angels logo on the 98 Pinnacle Performers card.  It was in one of the boxes that Mom picked up for me last year.  This is a really cool-looking set, and I have a fer others from it that I want to get back.

Here is a 2006 Topps, as well, so I can add another tick mark on my tally for Topps sets.  I used to have a ton of 2006 Topps, but offloaded a ton when I was selling Topps base at card shows. 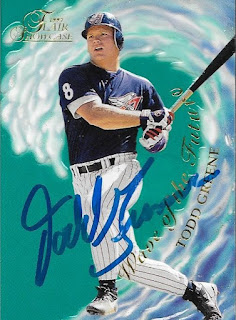 Finally, here is a 1997 Flair Showcase Wave of the Future that Greene signed.  It also turned out nicely, I think.  I got this at my LCS, as well.  During a prior trip through that box, though, I found a really cool David Arias (Ortiz) that I was able to sell for a nice profit.

I first mailed to Greene on November 1, but he sent the cards back unsigned with no explanation.  I saw that some folks had gotten him after, so I tried again on January 11.  The cards came back on January 21, for a 10-day TAT.
Posted by William Regenthal at 5:55 PM