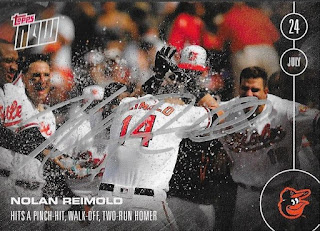 I couldn't leave my guy, Nolan, out of my TTM obsession.  I really had to send him something to sign and add it to the album and roster of TTM successes, even though I have been sent signed cards from him before,  When this Topps Now card of Nolan came out for July 24, I made sure to let his wife, Jenny, know that they were available.  Unfortunately, she was busy that day and forgot to pick a few up.  No problem, though, because I bought the package of five.  I told her that I had ordered them and intended to send her one, and she said that if I sent an additional one, she would have Nolan sign it for me.

So, I sent the two cards out at the beginning of August, only to find out that they were lost by USPS.  I didn't realize they were lost until January, so I went on Ebay and bought two more and sent those out.  Thankfully, the second package got to the Reimold house safely, and Nolan sent me this one back signed in silver Sharpie.  Now, this card can be placed among all of my other TTM and IP autos.

Nolan isn't signed for this season, yet, but I believe he will be soon.  He has a huge family, so he has a lot of commitments going on right now, anyway, but I'm sure he feels great and wants to continue his career.  It is unfortunate that his Orioles career is likely over for now, but you never know, he could be back at some point.  He is very popular in the Orioles organization, so maybe some day he will be a coach for them, if that is a path he wants to take.  My hope is that is a long way away and that he gets a deal to play in the majors for 2017.

Normally, for my TTM successes, I post a player's career stats, and for Nolan I will, but I fully expect the stats to be incomplete, as I believe he has several more years left in the tank.  Go get em, Nolan!!

Reimold (b. 1983) has played in the majors since 2009 for the Orioles, Blue Jays and Diamondbacks.  He has 339 hits, 56 home runs and a .246 batting average.  His career was derailed when he broke a bone in his neck while diving into the stands to catch a ball in 2012.  I've met Nolan on several occasions and he has always been awesome to me.  Although, I probably creeped him out pretty badly by inviting him to dinner with my friend, Ryan and I when the Bowie Baysox were in Richmond playing the Flying Squirrels.  I couldn't help it, I was pretty star struck and figured it would be a nice gesture.  Ryan told me later that it probably came off as a bit creepy, and I have felt embarrassed ever since.  We laugh about it now, though.  I meant what I said, I would buy him dinner sometime.

I met Nolan's wife, Jenny, through this blog because of a Bowie Baysox bobble head that I had picked up.  I traded it to Jenny for a pair of batting gloves that Nolan had been wearing during the final game of the 2011 season, when the Curse of Andino struck the Red Sox.  Ever since, I have corresponded with Jenny.  She has hooked my son and I up with some amazing stuff, and I am forever grateful for her generosity.  I hope Jenny knows how much I appreciate everything, even though I tell her thank you every chance that I get.

I sent the second package to Jenny on January 25 and got the card back on February 2, for an 8-day TAT.

Thanks again, Nolan and Jenny!
Posted by William Regenthal at 5:39 PM