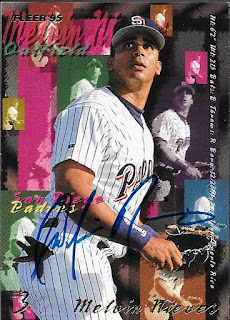 Here is another player from the 90s that I was able to have sign several cards, Melvin Nieves.  This 1995 Fleer turned out really nice.  This set might be one of the freakiest sets there was.  I think there was a gas leak in the Fleer building, and that is how the design for this set came about.  Still, it lends itself well to being signed. 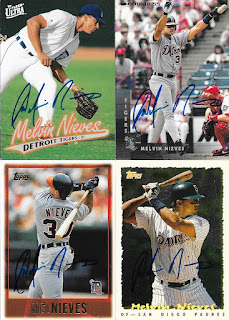 I had a lot to choose from for Nieves, and narrowed it down to six cards.  They all look pretty good, I think.  I believe the 1997 Fleer Ultra set looks really good when signed.  The 1995 Topps Cyberstats don't turn out as well as I had hoped, but they don't look bad. 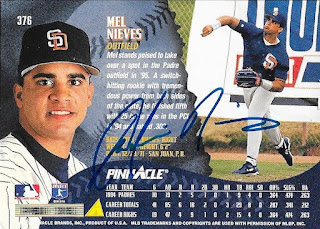 Finally, here is a 1995 Pinnacle that at first glance looked like it came back unsigned.  As I was putting it back in my box, I noticed the signature on the back of the card.  Ok, cool!  I'll take it!