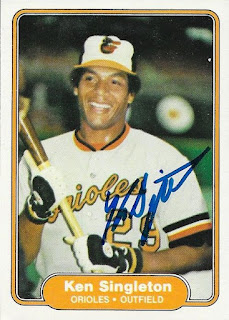 I was able to add another Oriole to my TTM success list recently when I got these signed cards back from Ken Singleton.  Along with the signed cards, I received a note from Singleton asking that in exchange for him signing my cards, would I make a contribution to the Cool Kids Campaign.  I sent them a check last week, since he was nice enough to sign my cards.

The above 1982 Fleer isn't the greatest of cards, but it will still be a nice fit in my album.  I have a couple of cards signed from that set, and they turn out as nice as can be expected. 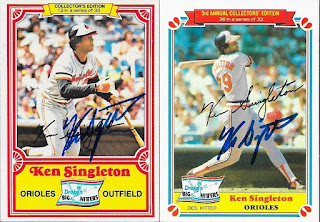 These two were the ones I was really looking forward to getting back from Singleton.  They are Drake's cards from 1981 and 1983 (left to right, respectively).  Seemingly made by Topps, since the backs of the cards are virtually the same as a 1981 and 1983 Topps.  They're pretty cool cards and I have no clue where I got them from.  I just know they have been in my Orioles box for a long time. 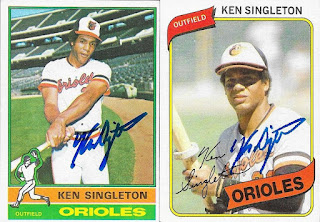 Finally, I had to include a couple Topps cards.  They are 1976 and 1980.  They are a few of the under-represented sets in my binder (80 especially, since I haven't really picked up much bulk of that set, yet).

I mailed to Singleton on January 11 and got the cards back on January 29, for an 18-day TAT.
Posted by William Regenthal at 11:58 PM