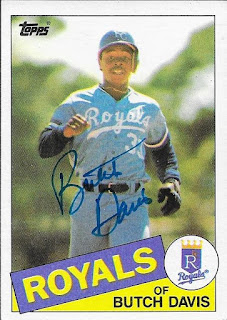 Here is a nice TTM that I received from North Carolina's own, Butch Davis.  I actually met Davis several years ago when he was a roving minor league instructor in the Orioles system.  Someone near me pointed out the Davis was in the movie, Bull Durham, and I thought that was pretty interesting.  There is a scene near the beginning of the movie where he strikes out and someone says something like "That's too bad, Butch..." or something to that effect.

Davis (b. 1958) was born right up the road in Williamston, NC (the same place as the Perry brothers, Gaylord and Jim).  He is an ECU grad and played in the majors in 1983, 84, 87-89. 91, 93 and 94 for the Royals, Pirates, Orioles, Dodgers and Rangers.  He had 110 hits, 7 home runs and a .243 batting average.  He is actually under consideration to return to the Orioles as a minor league coach after spending the last two seasons as a coach on Paul Molitor's staff with the Twins.

I mailed to Davis on November 19 and got the card back on November 25, for a 6-day TAT.
Posted by William Regenthal at 7:04 AM