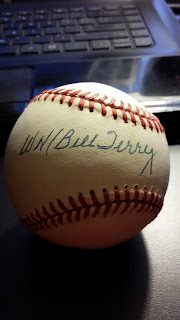 This post goes to show that I do post things other than TTM successes!  I am in Las Vegas for work, and was riding around town with my boss and two other coworkers when we decided to visit Gold and Silver Pawn.  Yes, the shop made famous by the TV show "Pawn Stars".  I went to the shop during my first visit to Las Vegas back in 2012 and didn't come away all that impressed.  The shop definitely looks bigger on TV.  This time, though, they had a lot more stuff that I was interested in.  They had a few signed balls (well out of my price range) and some cards.  I saw this Bill Terry ball, which didn't have a price.  So, I asked the lady and she said what the price was, then told me that she would make me a better deal than what it was priced at.  Their original price was what I had expected to pay for a Terry ball, so anything less was gravy.  I took the deal, and also bundled it with something for my son for Christmas.  The ball is really nice-looking and came with a PSA COA.

There was no official MVP award in 1930 due to financial constraints.  The BBWAA voted that Hack Wilson was the unofficial NL MVP, yet The Sporting News named Terry as the winner.  Wilson had 191 RBI (still a single-season record) and 56 home runs that year (and a .356 batting average), so it can be understood why the BBWAA named him over Terry.

Terry won the World Series in 1933 with the Giants who defeated the Washington Senators in 5 games.  He also appeared in Giants losses in the 1924 (to Washington) and 1936 (to the Yankees).  He batted a career .295 in 16 World Series games.