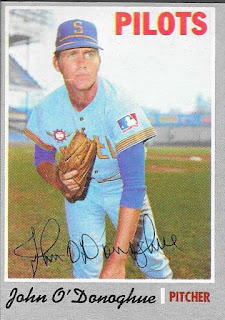 I got a bunch of nice mid-to-late 1960s cards signed by former pitcher, John O'Donoghue.  I also got the above 1970 Topps card signed.  I'm glad because it is another Seattle Pilots card.  The auto looks pretty good, even though it is in a thin blue ballpoint pen. 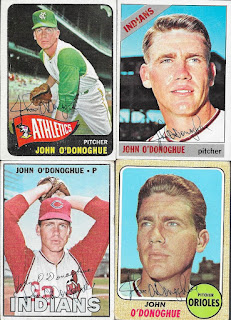 Here is a nice succession of his cards, starting with the above left 1965, above right 1966, bottom left 1967 and bottom right 1968.  It is always cool to line up Topps cards in succession and see how they play out.

I mailed to O'Donoghue on November 22 and got the cards back on December 5, for a 13-day TAT.
Posted by William Regenthal at 6:30 PM