Christmas Gift and a Deal From Brayden 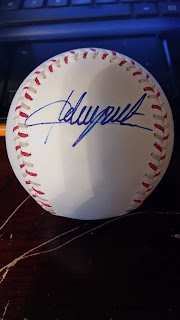 I got a surprise direct message a few days ago from someone on Instagram that I had never talked to before.  His name is Brayden, and he told me that he wanted to send me a care package because he had seen that I did a lot for the card community.  Brayden had some Orioles cards that he wanted to give me and we continued talking well after this was established.  It turns out that Brayden gets a lot of autographs from around Texas and had some baseballs I was interested in.  We made a quick and easy deal for the above Adrian Beltre signed ball.

The ball is a 2011 All Star baseball, but it was signed on the wrong side panel.  I didn't mind, and Brayden was really nice and made me a sweet deal that I couldn't refuse.  I wanted the ball because I feel like Beltre will be a Hall of Famer once he becomes eligible, so he would fit into my HOF collection. 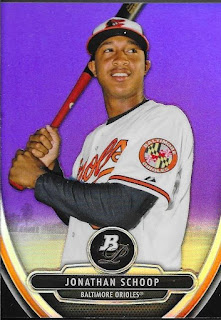 Brayden included the initial cards that he wanted to send with the Beltre ball.  Among them was this 2012 Bowman Platinum Schoop.  All of the cards Brayden sent were great, and I really appreciated them.  The best part of it all is that I feel like I made a new friend.  I hope we can keep making deals and talking in the future because he seems to be a really nice guy!

Thanks for the awesome deal and Christmas package, Brayden!
Posted by William Regenthal at 4:19 PM