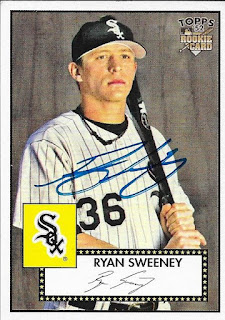 I was able to get some mid-2000s cards signed with this success from Ryan Sweeney.  I already had one signed Topps Rookie 52 (from Sean Henn), but adding another one to the album was just fine with me.  I busted boxes of 2006 and 2007 Rookie 52, so it was nice to be able to put a couple of them to some kind of use, since most of them have resided in my Rookie box since the boxes were busted. 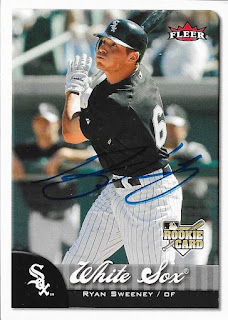 I've been piling up a few years of Fleer as well, and getting this 2007 Fleer was a plus.  I didn't open very many packs of this product, so there aren't very many examples that I can find in my boxes. 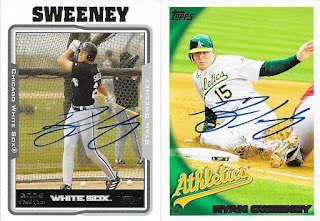 I mailed to Sweeney on November 12 and got the cards back on November 21, for a 9-day TAT.
Posted by William Regenthal at 4:45 PM