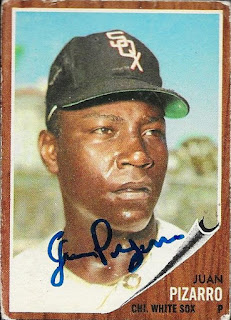 I was able to use a few more vintage cards from my box when I got two autographs back from former pitcher, Juan Pizarro.  This 1962 Topps was in fair shape, and I didn't have very many of those signed, so I thought it would be good to send it along.  It turned out pretty nice, I think. 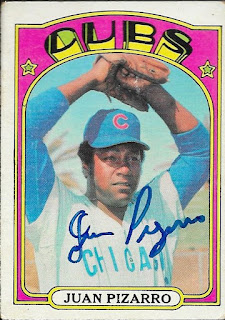 I wasn't sure if I had any other Pizarro cards, so I went through my partial 1972 set and found this one to send as well.  I have raided my partial set a few times.  I probably should stop so I can complete the set.  I'll get to it eventually.

I mailed to Pizarro on November 11 and got the cards back on December 1, for a 20-day TAT.
Posted by William Regenthal at 7:04 AM