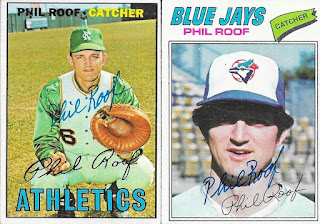 Here are two more vintage cards that I was able to get signed TTM with this success from Phil Roof.  I really like the 1967 Topps card on the left.  You get to see the Kansas City A's uniform, and Aa really cool looking catcher's mitt.  There sure is a lot of green on that card.  The 1977 on the right probably isn't Roof's best card, but it's not terrible.  They probably could have found a shot of him without a shadow covering half of his face, though.

I mailed to Roof on November 19 and got the cards back on December 2, for a 13-day TAT.
Posted by William Regenthal at 9:39 PM