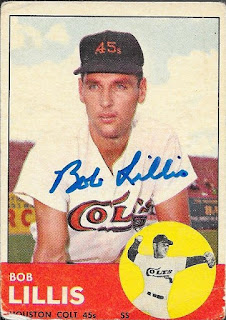 For whatever reason, I have been getting several Houston Colt .45 players back all at the same time, lately.  It hasn't been by design, just mere coincidence, really.  However, since I really love the old .45s jersey, I am perfectly ok with getting a bunch of their cards in.

This 1963 Topps Bob Lillis card was languishing in my vintage box, so I figured that when I saw that he was signing TTM, I would give it a shot. 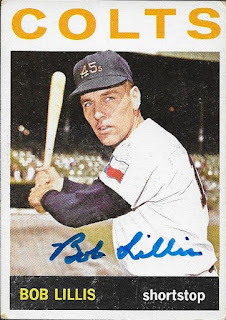 Because I only had the one card, I bought this one off of sportlots so I would have an additional card to send.  Both of them turned out really great, so definitely no complaints!

I mailed to Lillis on November 11 and got the cards back on November 21, for a 10-day TAT.
Posted by William Regenthal at 10:09 AM