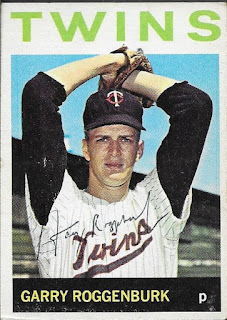 I received another TTM success on some nice vintage cards when I got these two back from former pitcher, Garry Roggenburk.  I believe both of these cards were in the vintage box at my LCS, and I got a sweet deal on a bulk stack.  Roggenburk signed them with a ballpoint pen, and the signature is hard to see, but it is still cool that I got the autos. 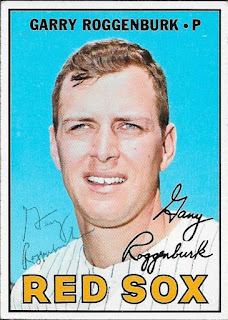 This one was interesting, mainly for a kind of embarrassing reason.  Roggenburk's left front tooth is chipped in this photo.  I also had that very same tooth chipped when I was 10 and it looked exactly the same.  So, I figured it wouldn't hurt to ask him how he chipped his, especially after I explained I was asking because mine had looked exactly the same.  He replied to my note saying he chipped it playing basketball.  I was glad he responded, because I know how self-conscious I was about mine (I've had it fixed somewhere around 5 times; the last time around 12 years ago).  Just a kind of odd interaction with a former player.

I mailed to Roggenburk on November 21 and got the cards back on November 29, for an 8-day TAT.
Posted by William Regenthal at 10:40 PM