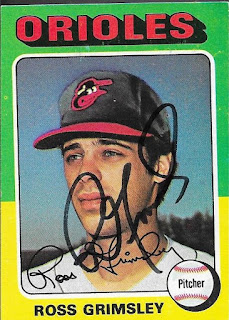 Before I left on my trip, I scanned a bunch of the TTM successes that I had received, so I could have them available to post about while I was gone.  I planned it out to have enough for each day, and I missed it by two.  Now, I'm even further behind on posting with the 13 new successes that were waiting on me when I got home.  Oops.

Oh well!  Here is a success from former pitcher, Ross Grimsley.  I sent him four cards on November 7 and got two of them back signed on November 25, for an 18-day TAT. 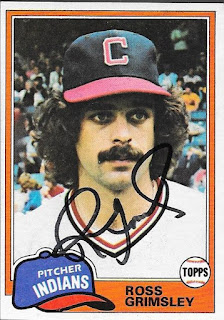 Of all of the cards I sent Grimsley, I really wanted to get this one back.  I don't think this card reaches the heights of Oscar Gamble, but it still is quite an example of the hairstyles that were rampant in the late 70s and early 80s.  I was also happy that he sent back the 75 Topps (at the top of the post), since that came out of a stack from one of my first deals with my good friend, Max.