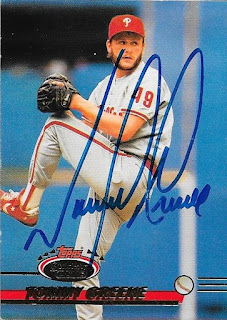 Here is a guy with a really nice signature, Tommy Greene.  I had seen that he signed TTM a while back and I just kept on finding cards of his every time I opened a box.  So, I finally put together a few cards that I thought would look nice and sent them along.

For whatever reason, I don't recall opening very many packs of 1993 Stadium Club when it originally came out.  I always seemed to have a ton of 1992 and 1994, but not much 1993.  Kind of weird.  Maybe I pulled the Ripken early and laid off of buying packs after that.  Still, I had this card and sent it along.  It turned out great, and I am glad I thought to include it. 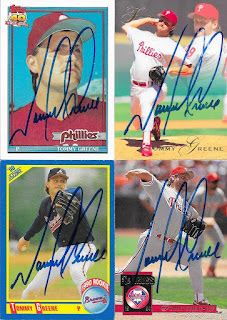 Here are the other cards I sent.  The Flair card (top right) turned out really well, even though I didn't pre-treat the card at all.  It makes me think that Greene was courteous enough to let it sit and dry before he handled it.  It did bubble up some, but not nearly as bad as I have seen other cards do.  I think my favorite of the batch is the 1990 Score.  The blue signature really matches the card.

Greene (b. 1967) played in the majors from 1989 to 1995 and 1997 for the Braves, Phillies and Astros.  He is a North Carolina native, having grown up in Whiteville, a town where one of my good friends lives, and I have worked in quite a bit.

I mailed to Greene on November 5 and got the cards back on December 2, for a 27-day TAT.
Posted by William Regenthal at 9:49 AM