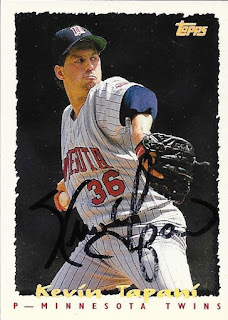 I was able to put some mid-90s cards to use by sending a few to former pitcher, Kevin Tapani.  The above 1995 Topps came out of a box I busted for the set.  This is the cyber stats parallel, and it looks like I'm going to need to be pre-treating these cards a bit before I mail any more off.  The signature bubbled up quite a bit.  I thought it looked better in person, but the scan really shows how bad it bubbled. 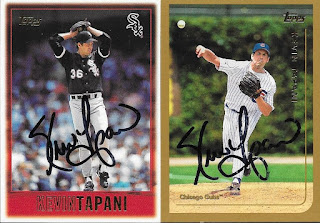 There two turned out better, even though the 1999 Topps on the right bubbled some as well.  The problem with those mid-to-late 90s Topps is that they are way too glossy.  A bunch of collectors know this the hard way when they get a bunch of these stuck together and they become impossible to separate. 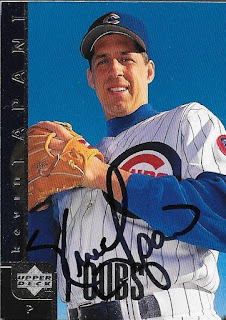 This 1998 Upper deck turned out nice.  I don't have very many of these, just a few that I got in a box from my mom.  It's a pretty nice card, though, and will look good in the binder.

I mailed to Tapani on November 9 and got the cards back on November 22, for a 13-day TAT.
Posted by William Regenthal at 9:31 AM