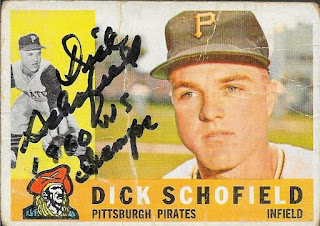 I had gone through my vintage Topps box a while back and saw that I had two Dick Schofield cards that could be sent TTM.  The above 1960 was (and is) pretty beat up, so I knew I wouldn't be holding that for my set.  It turned out to be a pretty nice card.  I was glad that Schofield inscribed it with the 1960 WS Champs inscription. 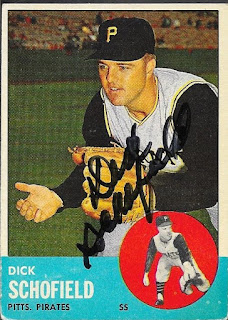 This 1963 wasn't as beat up, but it still was a little rough.  I'm glad to be able to do something with the cards, even though they aren't "mint" by any means.  Some folks still don't understand that you can enjoy a card, even though it isn't pack fresh. 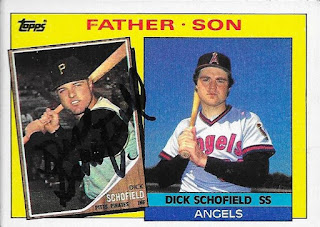 Finally, I was able to get this 1985 Topps Father/Son card signed.  The younger Schofield doesn't sign much, apparently, so I will probably refrain from sending it out.  It still looks nice.

Schofield (b. 1935) played in the majors from 1953 to 1971 for the Cardinals, Pirates, Giants, Yankees, Dodgers, Red Sox and Brewers. He had 699 hits, 21 home runs and a .227 batting average.  He won the World Series with the Pirates in 1960.  Not only did his son have a lengthy career in MLB, but his grandson also has been in the majors for a long time.  His grandson is Nationals outfielder, Jayson Werth.

I mailed to Schofield on November 11 and got the cards back on November 25, for a 14-day TAT.
Posted by William Regenthal at 10:46 AM