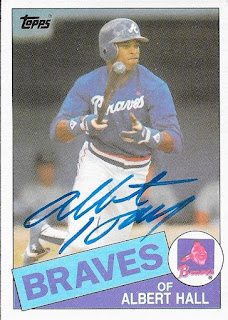 Albert Hall was another one of those players that I knew did TTM, but for some reason just kind of hung out in my box for a long time before I finally sent to him.  I'm glad I finally did, if not for anything else, but to move the cards and make room for another player.

The cards I had for Hall were pretty nice ones.  The above 1985 Topps looks really nice, especially if you are a fan of the color blue.  It is ok, I think, but not my favorite color by any means.  All of the blue, however, really does make this look like a nice card.  I'm sure it was unintentional on Hall's part when he signed it in blue, but it really adds to it. 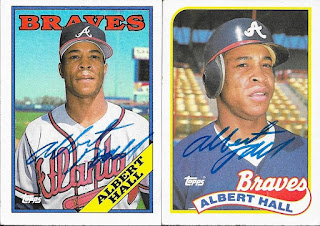 I'd love to send him something! Do you have his address? Do you know where I can find it? Thanks!

Email me and I'll help you out.