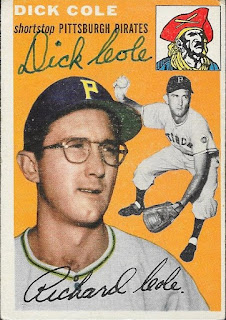 I added one more 1954 Topps to my auto album with this success from former player, Dick Cole.  I was making a purchase on sportlots and decided that I wanted to fill out my cart with someone from '54 who signed, so I picked this up for a really cheap price (that I fail to remember).  The card turned out great, and Cole also included a signed business card of him as senior consultant to the Giants and inscribed 2010, 2012 and 2014 (World Series Championships).

I mailed to Cole on November 21 and got the cards back on December 1, for a 10-day TAT.
Posted by William Regenthal at 11:23 PM