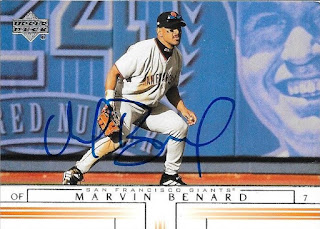 There are some players in my "to be TTMed" box that have floated around in there for quite a while.  For whatever reason, I get set to send to a player, and some of them keep getting pushed back until I finally force myself to put them in the mail.  Nothing against that player, it just kind of happens (especially if I have a batch of vintage guys to send to).

The above 2002 Upper Deck is the card that has been put aside the longest.  It was in a box of mine, which I went through looking for TTM subjects earlier this year.  I loved the horizontal photo and that year of Upper Deck. 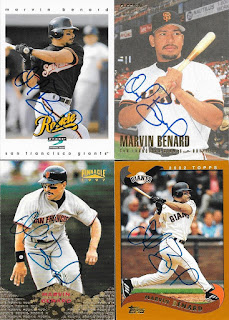 Over the course of a few months, I actually was able to locate more cards of Benard.  They all came out of various boxes I have had sitting around here, so it was nice to put them to use (and make room in the boxes).  The 1997 Pinnacle, as you can tell, was part of a batch of late 90s cards that had gotten stuck together.  Luckily, the card wasn't damaged too badly, and it still was able to get signed.

I mailed to Benard on November 7 and got the cards back on November 21, for a 14-day TAT.
Posted by William Regenthal at 7:49 PM