Bud Selig Elected to the Hall of Fame 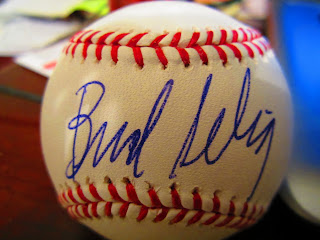 Just like that, I am able to say that I now have 129 Hall of Famer's autographs on baseballs.  I learned today while sitting at the Sports Book in the Westgate Hotel that former commissioner, Bud Selig, was elected to the Hall of Fame.  He will join Braves executive John Schuerholz and any players named on the BBWAA ballot January 18th.

Selig (b. 1934) was the 10th commissioner of baseball, and also the former owner of the Brewers.  He was part of a contingent that moved the Seattle Pilots to Milwaukee before the 1970 season.

I'm happy to be able to add another Hall of Famer this easily, since I have had this ball for some time now.  I sent a China ball to Selig back in 2010 or 2011 and he replaced it with this signed OMLB ball.  I can now move it over to my HOF collection!
Posted by William Regenthal at 2:21 AM