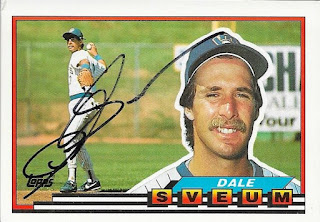 Here is another player that I had a ton of cards of that somehow eluded my sending out for some time.  I finally got a request out for Dale Sveum, and I am really happy with the results.  The above card is another Topps Big (1989).  Originally, I didn't care for these cards.  I thought they were too big and they didn't really fit well in my collection boxes.  I have now realized that these cards are great for signing.  This one turned out really nice, I think. 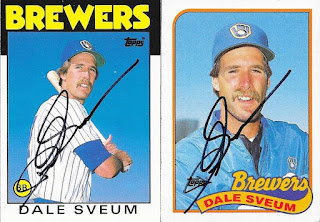 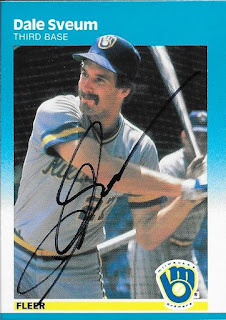 1987 Fleer is a nice set that I think is starting to grow on me for autographs.  I never opened much of this when I was younger, but I have a box of them that came from Mom.  The blue looks really nice when scanned.

I mailed to Sveum on November 18 and got the cards back on November 28, for a 10-day TAT.
Posted by William Regenthal at 6:43 PM