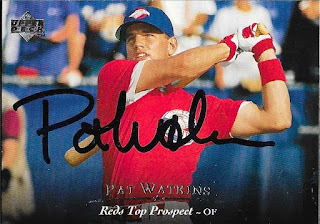 I've said it before that doing TTM requests has really helped me expand what I look for when I look through a box of cards.  Gone are the days when I would look for just "name" players and toss all of the non-stars in a box, just to be packaged up as gift packs to give to kids (or Goodwill).  Now, I am able to take some of those cards, and request some autos, and maybe learn a little more about some of those forgotten players.

I was going through a box that Mom had gotten me, and found a few 1995 Upper Deck Minors cards.  I was happy to see a couple old Winston-Salem Spirits cards in the stack.  The Spirits were the Carolina League (A) team of the Cubs when I was a kid, then became associated with the Reds.  I went to a couple Spirits games with my grandpa, and also my mom would take us as well.  I don't remember whether or not if we saw Pat Watkins play, but odds are that we did.

I was really happy with how this card turned out.  I can't really tell, but it doesn't appear that the photo was taken in Winston at Ernie Shore Field, but I could be wrong.  I mailed to Watkins on November 9 and got the card back on November 23, for a 14-day TAT.