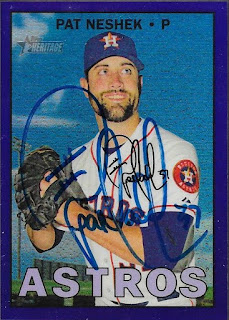 I don't do too many TTMs of current players, mainly because I never know which ones are signing.  Everyone who does TTM, though, knows that Pat Neshek is one of the best signers that currently play in the majors.  I had a few cards that I wanted to send him, then I bought a box of 2016 Topps Heritage Update and pulled this purple chrome parallel.  Once I had that, I knew I needed to get my cards in the mail.

I had been pre-treating some chrome and Finest cards with a pencil top eraser and have gotten pretty decent results.  However, I had heard that baby powder worked really well on chromes, so I figured I would give it a shot.  So, this card was put in a ziploc bag with a little baby powder, then wiped clean with a wash cloth.  As you can see, the auto turned out pretty nice, and didn't bubble at all.  Not bad.  I think I'll probably stick with baby powder for the chrome and Finest cards.  I do have some that were rubbed with an eraser coming up in a few future posts, so a comparison can be made. 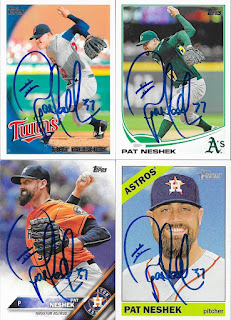 Rumor had it that if you sent any autographed cards to Neshek, he would send you one of his own, so I pulled a couple autos that I had in my card show box and sent them along.  He returned my mailer back with the two cards at the top, a 2010 Topps and 2013 Topps.  Not bad!  The bottom two are the other cards I sent for him to sign, a 2016 Topps and 2015 Heritage.  All of the cards turned out great.  He definitely has one of the best signatures around.

I mailed to Neshek on November 23 and got the cards back on December 3, for a 10-day TAT.
Posted by William Regenthal at 11:06 AM