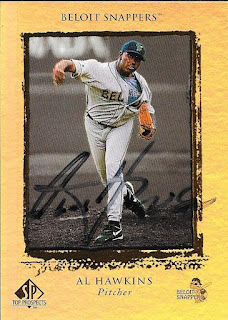 I got a really awesome TTM success from a card that was for some reason hanging out in my boxes.  I think this came out of some repack box somewhere in in the past and it just kind of sat around for years.  Finally, when I started looking up folks who signed TTM, I kept seeing this card when I was searching my boxes.  I found out that Al Hawkins does sign TTM, so I figured, why not?  Then, when I looked at where he was from, I had to send to him!

Hawkins (b. 1978) was born in Elizabeth, NJ, the same place where my father, uncle, aunt, grandmother and grandfather were born.  My family has long lived in Elizabeth and the surrounding towns, such as Linden and especially, Roselle Park, where my great grandparents made their home.  My great-grandfather (emphasis on the great) built so many houses on one of the streets in Roselle Park, he was allowed to name the street.  He named it after my grandmother, but of course the town misspelled it.  So, if you are ever on Elinor Avenue in Roselle Park, NJ, you are driving on that street.  I could go all day about the family history, but I need to get a lot of stuff done for Christmas.

Hawkins wrote me a nice note back saying that any time I wanted something signed, to send it along and he would sign it.  He seems to be a really nice guy.  He was drafted by the Brewers in the 15th round of the 1996 MLB Amateur Draft.  He never cracked the majors, having spent 6 seasons in the minors and one in independent ball.  His career minor league record (including independent ball) was 36-44 with an ERA of 4.97 and 351 strike outs.

I mailed to Hawkins on October 25 and got the card back on December 2, for a 38-day TAT.
Posted by William Regenthal at 12:21 PM