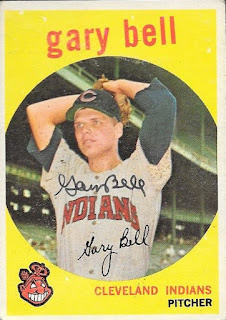 Here are some more vintage cards that I was able to pull in via TTM recently with this success from Gary Bell.  I picked up a few of his cards from COMC and sportlots so I could add a few more tick marks to my notebook.  I love the 1959 set, so adding another to the TTM/IP auto album is always a plus.  Bell's signature is really small, but it is nice and also legible, so I don't feel like it takes away from the card. 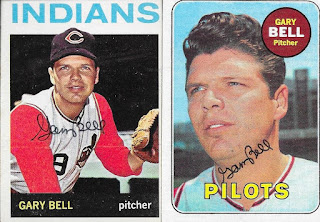 Here is another 1964 Topps and also a 1969.  Surprisingly, even with me working to complete the 1969 set, I only had a couple signed cards from the set.  I need to try to find a few extras here and there of guys who sign.

I mailed to Bell on November 21 and got the cards back on November 30 for a 9-day TAT.
Posted by William Regenthal at 4:32 PM