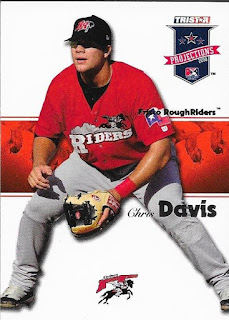 Even though he is a huge Red Sox fan, I get along with my friend, Gerard, really well.  He's a great guy who I have talked to quite a bit.  He has won one of my Instagram contests and I have also sent him a TTM starter pack.  We got to talking after the TTM starter pack was sent, and I have helped him get started with that part of his collection.

He messaged me earlier this month saying that he was really excited about the Christmas package he was putting together for me, and he hoped I would like it.  Well, he nailed it.  I was really surprised that I didn't have the above Tristar Projections Chris Davis in my PC.  I mean, I was REALLY surprised.  So much so, I double and triple checked my Davis spreadsheet, and nope, it wasn't listed yet.  Wow.  Someone found something I didn't have yet! 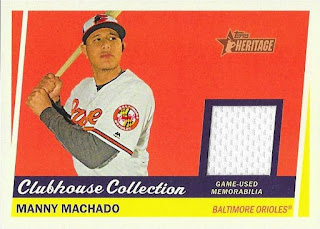 I also didn't have this 2016 Heritage Manny Machado relic.  Gerard really did well with this package.  I can't say that enough. 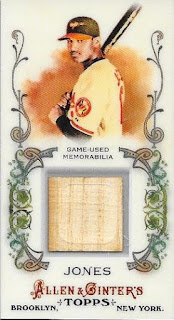 Maybe it's just me, but this one is kind of an oddball.  Maybe I missed it, but I thought the mini relics in Allen & Ginter were all framed.  I'll have to ask Gerard about this one again.  It is really cool, regardless, and I know I didn't already have it.  I just thought they were all either framed, or regular sized cards.  I haven't busted much Ginter lately, so I probably just missed that they were doing unframed mini relics.  It helped me know that I didn't have the card already. 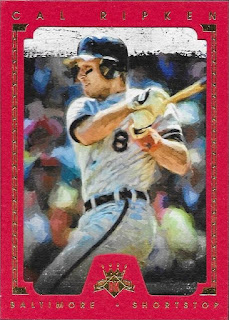 Finally, Gerard nailed it again with a Cal that I didn't have in my collection yet.  I've said it many times that it is really tough for me to pick up Cal stuff because I have no idea what I even have any more.  So, this red framed 2016 Panini Diamond Kings is definitely an awesome card.  It is numbered 78/99 as well.

All of the cards that Gerard sent (he send a stack of Orioles as well) were great and all, but the best part of the Christmas gift was the full page letter that he included in the package.  I really appreciated his kind words in the letter and can't thank him enough for his friendship over these last several months.  Gerard is a great guy, and I hope I can do many more trades with him.

Thank you so much for the package, buddy!  I love it!
Posted by William Regenthal at 5:59 PM