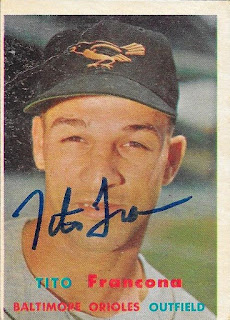 I saw on sportscollectors.net that Tito Francona was signing TTM.  When I saw that I had one of his cards in my vintage box, I decided to go ahead and send to him.  I wasn't satisfied with just one card, so I went to sportlots and picked up this 1957 Topps Francona so I could have a card of him as an Oriole.  I'm glad I got it, because I love the 57 design and was happy to add another to the autograph project. 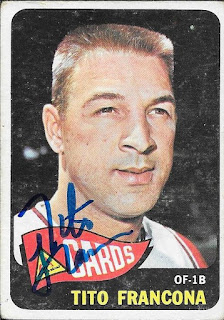 This 1965 Topps is the card that I had in my vintage box.  I also didn't have many of these in my autograph project.  1965 is one of my favorite Topps years, but I never have had all that many cards.  I would love to start the set sometime, but I know it will be an expensive endeavor. 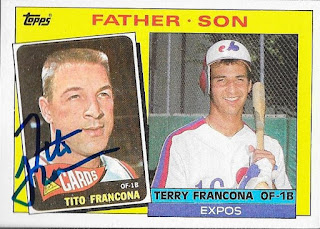 Finally, here is another 1985 Topps Father/Son card.  Terry Francona doesn't sign very much, so this one will likely stay as is.

I mailed to Francona on November 21 and got the cards back on November 28, for a 7-day TAT.
Posted by William Regenthal at 6:41 PM