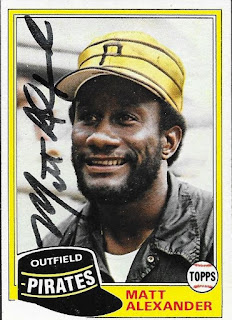 I had some Matt Alexander cards set aside for a while, then finally got around to mailing them out.  The cards started with this 1981 Topps that I pulled when I went through the set to see who signed.  I added some others (1977 and 1982 Topps) and figured that was plenty to send.  Now, as it turns out, I could have just sent this 1981 when I found it, because Alexander is "one per" and I didn't realize that.  Oh well, of the cards that I had, this one was the one I really wanted back anyway.

I mailed to Alexander on March 2 and got the card back on March 20, for an 18-day TAT.  He kept the other two cards that I sent.
Posted by William Regenthal at 10:01 AM