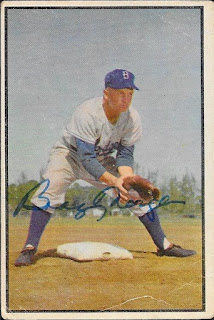 I love adding 1950s players to my autograph album.  There aren't many of them left, but when I get the opportunity to get autographs of them, I jump at the chance.  I saw that Bobby Morgan signed TTM, so I went on Ebay and picked up some nice cards of his that I felt like would look great.  I also wanted to make sure I added a Bowman to the album, preferably one that I didn't already have represented.  So, the above 1953 Bowman color was the one I chose.

The card turned out really nicely, I think.  I have since added a few other 1953 Bowman Color cards, but this was the first one.  I'm happy that I make myself pursue different years of different cards.  It makes every time through my albums an experience. 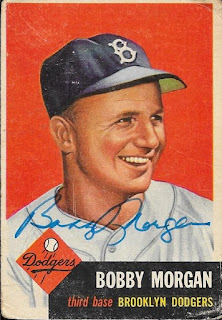 I did have to add a Topps card of his, so I picked the above 1953 Topps.  It also turned out really nicely.  I really enjoy 1953 Topps.  This is a set that has grown on me over the years.  If I had the money, I seriously would work on this set, but I don't have that kind of money.  Still, I like to pick up star cards from this set when I can.

I mailed to Morgan on March 8 and got the cards back on March 16, for an 8-day TAT.
Posted by William Regenthal at 9:58 PM