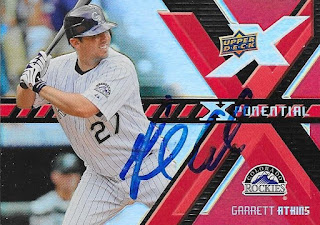 Upper Deck X is probably one of the least popular products in the hobby.  It was a lower price-point product that was geared more toward kids and retail.  Still, some nice cards did come out of the product, and if I was going to have somethig represented from that set, the above XPonential insert of Atkins was a nice one to go with. 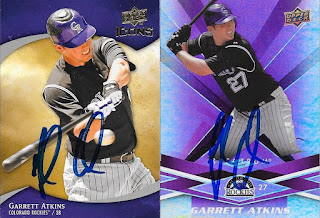 With the perceived faults of Upper Deck and their products, UD Icons and Spectrum were some really nice ones that came out of the late 2000s.  I was really excited to add the 2009 Icons to the binder.  I opened a ton of that product back then, hoping for a Matt Wieters auto, never to pull one.  The Garrett Atkins card is actually one of the last remaining cards that I had left from what I opened back then.  The rest were doled out in care packages and lots sold at card shows (or given out at Halloween).

I also love the foil UD Spectrum, which came from 2009, as well.  I think of all of the three Atkins cards that came back, that one looks the best.  I also sent a 2009 UD Baseball Heroes, but Atkins kept that card.