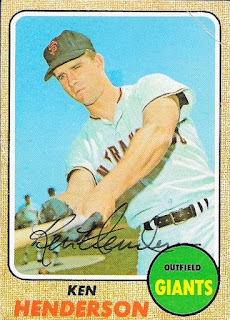 My "to be blogged" TTM stack is getting smaller,  but it still is a long way from being caught up.  I still have other cards to blog, which I will get to eventually.  Right now, here is a TTM success from Ken Henderson.

His 1968 Topps card came out of my vintage box, and turned out pretty nicely.  The 1968 design is pretty prominent this year, with it being the subject of this year's Topps Heritage product.  I don't mind the burlap design, but I know people who hate it.  I file it under those unique border designs like 1955 Bowman, 1962/1987 Topps and 1975 Topps. 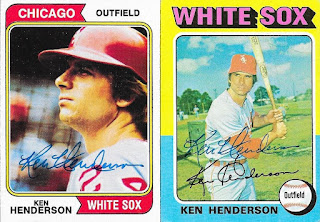 Speaking of 1975 Topps, here is one (on the right) paired with a 1974.  What a contrast between two adjacent years.  Still, they both turned out nicely.  I would like to pick up some more bulk 1974 Topps at some point, since I have very few (outside of my completed set) in my hoard.

I mailed to Henderson on February 13 and got the cards back on March 21, for a 36-day TAT.
Posted by William Regenthal at 5:59 PM