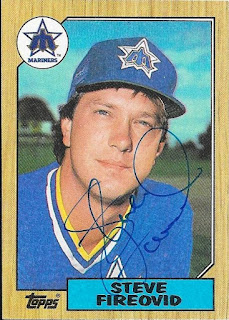 I sat on these Steve Fireovid cards for a while, before I sent them out.  Some of them were sat on longer than others.  First off, though, I had to add another 1987 Topps to the album.  That set is the one I have the most of, by far.  I don't plan on letting up on it, either. 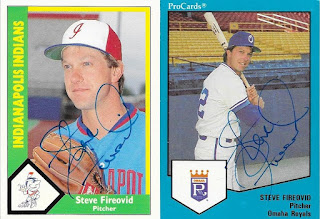 The real highlights, though, were these two minor league cards.  The card on the left came out of the box of stuff Mom pulled down from the attic a while back, so it has probably been in my collection for over 20 years.  The card on the right came out of a box that my wife bought off of Ebay back in 2007.  So, I have been able to add these two cards to my album that have been languishing in boxes for quite a lot time.  Now, they will have a place where they can be displayed for all to see (all who come over and look through the album, I guess).

I mailed to Fireovid on March 8 and got the cards back on March 20, for a 12-day TAT.
Posted by William Regenthal at 9:19 PM