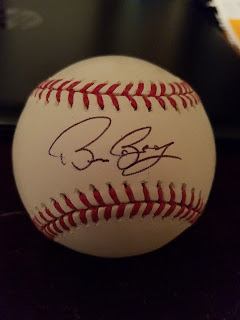 I have virtually stopped sending out baseballs TTM.  I learned the hard way that the only right way to do a baseball TTM is to send out an Official MLB baseball, and those generally go for $20 a piece, unless you can get a decent deal on a case.  China balls are worthless, and eventually, the autograph that you sought to get becomes a blurry mess (or fades completely).  So, I have jumped headfirst into sending cards TTM and haven't looked back.

That being said, I will send a ball from time to time.  If I am certain that the ball will come back (mail mine back, Jim Bunning!!), then I will send one out to a worthy recipient.  Hence, this Bruce Bochy success.

I mailed to Bochy on February 8 and got the ball back today (April 1) for a 52-day TAT.

Bochy is a likely Hall of Famer when he decides to retire.  I figured I would be proactive and get a ball now, just in case.
Posted by William Regenthal at 8:20 PM