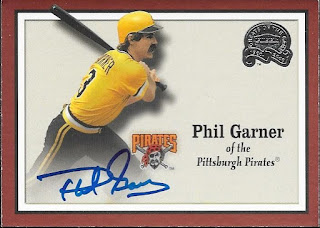 A lot of the cards that I have been sending out lately have come from boxes that are in the back room of my LCS.  The shop owner has graciously allowed me to look through the boxes and take what I want, within reason, and purchase for my collection.  I have found quite a few cards that I didn't know existed from sets I wasn't able to open when they came out.

I had a plan to send TTM to former manager, Phil Garner, and was about set on what I would send, when I found the above 2000 Fleer Greats of the Game.  I knew when I saw it, the card would be the highlight of any success I was able to get from him.  I was right.  The card looks great.  I love the bold yellow Pirates jersey. 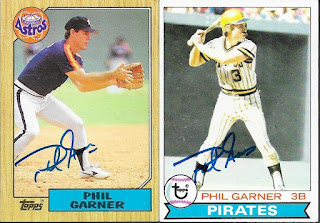 Speaking of Pirates jerseys, check out the awesome pinstripes on the 1979 Topps.  That card was the final card included in the package.  My wife is actually the one who made the decision for me to add the card.  It really looks nice, too, so I'm happy that she chose that one.  The 1987 on the left?  Well, if there is an 87 available to send, it usually trumps all others. 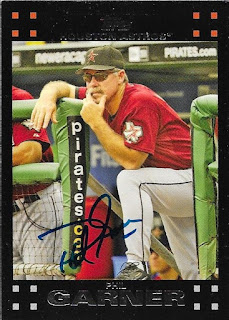 Finally, I added this 2007 because I don't have a whole lot of them represented in my album, so I took the opportunity to add this one.  It is kind of cool how he is an Astros manager on the card, at the Pirates stadium.  It kind of ties his career path together.

I mailed to Garner on February 27 and got the cards back on March 10, for an 11-day TAT.
Posted by William Regenthal at 5:52 PM