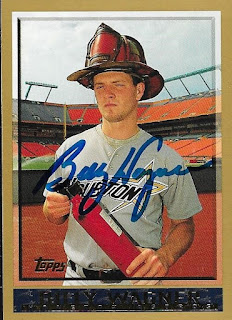 I got a really cool TTM success from former closer Billy Wagner recently.  I had seen that he was signing, but I was still surprised when these cards came back signed.  The above 1998 Topps was the cards I really wanted to add to the album.  That set is really underrated, and has some nice shots of players on some of the cards.  Take a look at the Vladimir Guerrero card in the 1998 Topps set, and you will see what I mean. 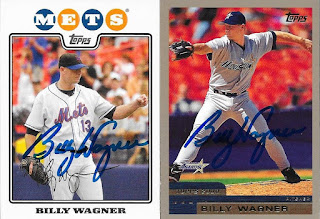 I used the request to Wagner to be able to add a couple years of Topps that I had very few of to my album.  I can't remember the last time I was able to add a 2000 Topps.  It turned out that I sent a few of them out all at once, though, due to there being several subjects in the boxes at my LCS.  I also added a 2008 Topps, which is no longer the set I have the fewest of in the Topps Autograph Project (2001 and 2009 are really lacking at this point). 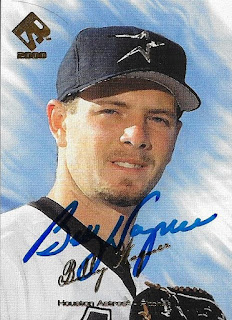 Finally, this 2000 Pacific Private Stock was a nice card to get signed.  I had a few cards from this set in my collection, but none of them signed.

Wagner has appeared on two Hall of Fame ballots (2016 - 10.0%; 2017 - 10.2%) and many sports commentators feel he has a strong case to receive more votes over time when the glut of names on the ballot is reduced somewhat.