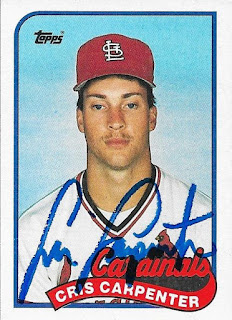 Not to be confused with the St. Louis Cardinals pitcher of the mid to late 2000s, this Cris Carpenter was a Cardinal long before.  He also is the proud owner of the awesome mustache shown on the above 1989 Topps.  Yes, I had tons of Carpenter cards to choose from, but I had to put this 1989 Topps in the mix because, well, it kept popping up throughout my time collecting cards.  It never failed, it seemed, to pop up whenever I opened a pack of 1989 Topps.  I found it odd that the signature bubbled a bit on this card, as that usually doesn't happen on the older cards like this one. 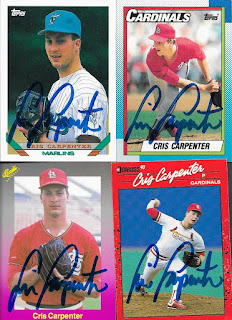 I added quite a few other cards with the success.  I had to toss in a couple other Topps (the 1993 and 1990), an oddball Classic (1989) and the always awesome 1990 Donruss.  Thankfully, Panini has resurrected the 1990 Donruss design, albeit in a white border with black writing.