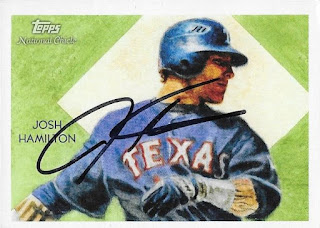 A commonly known fact about TTM signing is that if you send something to Josh Hamilton, you will get your item back after Christmas.  Hamilton always signs items around Christmas time for his fans, so I wanted to make sure I got something to him in time for Christmas 2016.  I had a lot of items to choose from, but ultimately, I settled on this 2010 Topps National Chicle.  I didn't have any of these signed, yet, and I also liked the horizontal card.

Hamilton (b. 1981) has played in the majors from 2007 to 2015 for the Reds, Rangers and Angels.  He was a former #1 overall pick by the Rays in the 1999 June Amateur Draft.  His career was seemingly derailed due to substance abuse issues until he was claimed in the 2007 Rule V draft by the Reds.  Since that time, he has been selected to 5 All Star teams, won the 2010 AL Batting Title and the 2010 AL MVP Award.  Also, a three-time Silver Slugger Award winner, Hamilton has suffered multiple injuries which have limited his playing time (and caused him to miss all of the 2016 season).

I mailed to Hamilton on October 25 and got the card back on February 11, for a 109-day TAT.
Posted by William Regenthal at 6:13 PM