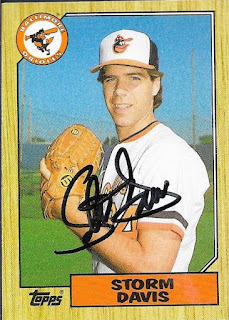 One thing I look for over most other things when sending a TTM request is a past relationship with the Orioles.  Obviously another big key is whether or not I have a really interesting card or something, but generally, I have been trying to pick up former Orioles when I can.

Storm Davis is one such Oriole.  I have been collating a bunch of his cards lately, and finally got around to mailing to him.  I had to sift through what I pulled of him and came away with five Topps cards.  I absolutely had to include a 1987 Topps, and as of tonight, I have 41 cards signed from that set.  No, not 41 Davis cards, but 40 different signed cards.  Not bad. 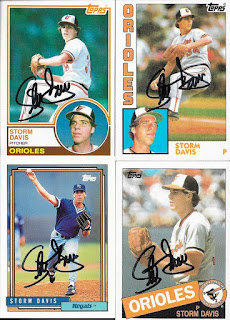 Here are the other Topps cards that I got, clockwise from top left, 1983, 1984, 1985 and 1992.  I picked the 1992 ahead of some other years because I needed to add another there since it was kind of lagging behind the other years I had available.