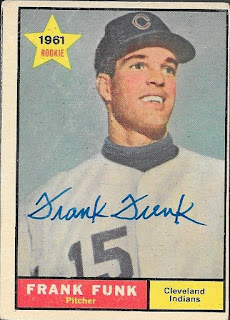 Ah, another 1961 Topps card from the antique shop.  What I did was open up Weston's account on sportscollectors.net (thanks Weston) and pulled ten guys who signed TTM out of the box that Conrad had at the shop.  Some of them, I was able to find other Topps cards to send out, and others, well, I had only the '61s to send.  Still, they all turned out pretty nicely, I think.

I really like Funk's signature.  It looks like the style in which he wrote his Fs is the same style that Mickey Mantle used for his Ms.  Interesting, maybe.