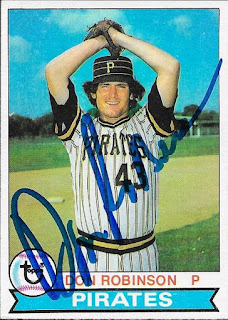 I added a nice run of Topps cards and interesting uniforms with this TTM success from Don Robinson.  The above 1979 Topps card showing a pinstriped Pirates uniform and pillbox hat might be the best card of the bunch.  Those are really cool uniforms.  I like the bright yellow ones better, but these are pretty good. 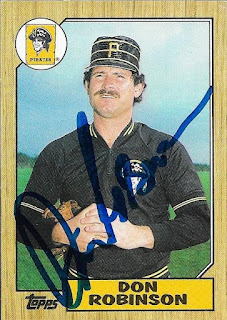 Here is another 1987 Topps for the binder, and another pillbox hat.  I don't know if I would wear one of these hats in public, but they still are pretty cool. 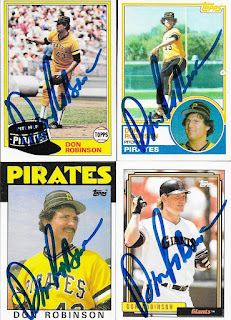 Wow, there are three more cards with that Pirates hat.  Now we have three of the yellow uniforms.  The 1981 Topps takes the yellow to a whole new level.  The 1986 looks really nice with the black and white border.  THen you have a 1992 Topps with a basic Giants jersey.  It turns it into an SAT question; which of these does not belong?

I mailed to Robinson on February 15 and got the cards back on March 4, for a 17-day TAT.
Posted by William Regenthal at 6:32 AM