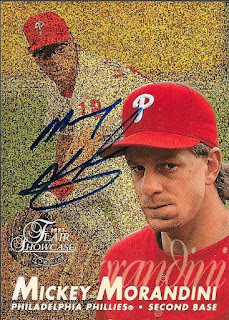 This was a TTM that I was really excited about getting back, and I had to wait a while to even send it out.  I saw a while back that Mickey Morandini signed TTM, but all of the successes were from folks sending to the Phillies, so I had to wait a while until I thought it would be a good time to send.  I didn't want to send to the Phillies' Stadium toward the end of last season and have to wait until after opening day to get the cards back, so I sent them out during Spring Training.

In the meantime, I collected a bunch of his cards that I found at the card shop and waited.  It was worth the wait.  Check out the 1997 Flair Showcase above.  This card was the one I wanted to get signed the most.  I pre-treated it with baby powder before I mailed it and it turned out so nice. 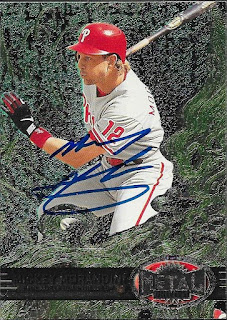 I really had put together some really nice cards of Morandini.  This 1997 Fleer Metal is so cool, too.  I have gotten a few of these cards signed, and I love them all.  I really enjoyed collecting the Marvel set of Fleer Metal when they came out, and having a few of the baseball card versions in my album really is awesome. 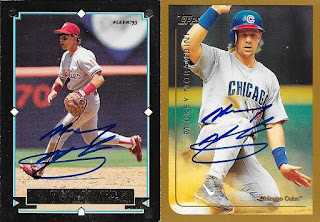 The Morandini package actually started with the 1993 Fleer Golden Moments (left).  I thought the card would look nice in my album, and it grew from there as I found more and more cards.  I had to include a Topps card in the package, and what better one than the above 1999 Topps showing Morandini in a Cubs uniform?  I figured my buddy, Max, would like seeing that one. 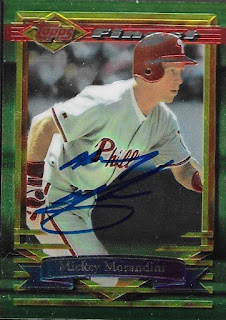 Finally, here is a 1994 Topps Finest that I also had to pre-treat with baby powder.  It looks pretty cool, as well.  These cards sign really well, and are a lot of fun to look at in the album.

I mailed to Morandini on February 8 at Phillies Spring Training and got the cards back on February 18, for a 10-day TAT.
Posted by William Regenthal at 10:24 PM