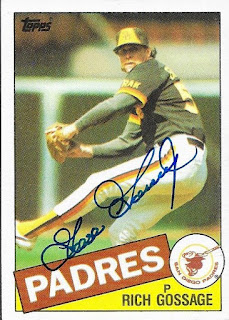 There are a few guys I sent baseballs to back when I first started doing TTM that I really am wanting to get on a card or two.  One of them came back recently from Hall of Famer, Goose Gossage.  I sent two cards, this 1985 Topps and a 1987, and he signed one of them.  Realistically, this one looks better, anyway.  The 1987 was a bit dark.  I have only a few 1985s less than 1987, those two sets are neck and neck among the leaders of what set I have the most signed cards of.

I mailed to Gossage on January 26 and got the card back on February 4, for a 9-day TAT.  I was able to get the autograph without paying a fee, as well!
Posted by William Regenthal at 8:52 PM