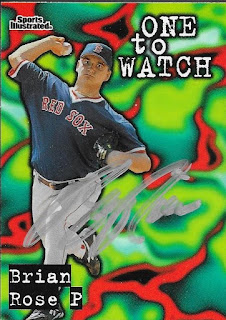 The top card is one wild card, isn't it?  I had actually hoped to have had another to blog a few months ago when I got my TTM success from Kevin Polcovich, ubt he swapped my card out for a Carolina Mudcats card.  Luckily, I had found another guy from the same set to send to, and finally have one of these to add to my album.  Thanks to Brian Rose.  No relation to Pete or Axl.

This is a 1998 Fleer Sports Illustrated One to Watch, and it is a pretty cool looking card, especially when signed.  Rose went one step further and signed it in silver Sharpie, which is an interesting look, for sure. 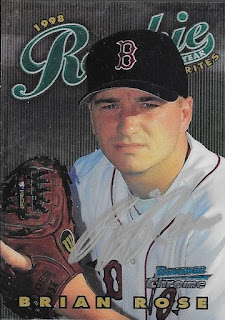 He also signed this 1997 Bowman Chrome in silver Sharpie.  It doesn't show up as well on the scan, but it is there, for sure.