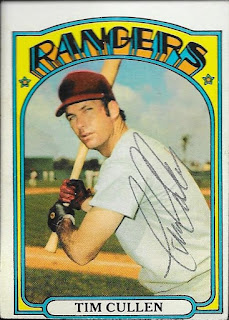 I added another signed 1972 Topps to my autograph album with this TTM success from Tim Cullen.  The autograph is as basic as they come; a bunch of swirls with a ballpoint pen, but the card is signed.

Cullen (b. 1942) played in the majors from 1966 to 1972 for the Senators, White Sox and A's.  It's funny that this card has him listed as a Ranger; the Senators became the Rangers after the 1971 season, but Cullen was released by the Rangers in March of 72 and picked up by the A's.  He went on to win the World Series with the A's in '72.  Also, Cullen was traded by the Senators to the White Sox in February 1968 with Buster Narum and Bob Priddy for Ron Hansen, Dennis Higgins and Steve Jones.  He was later traded back to the Senators from the White Sox in August of 1968 for... Ron Hansen.  Kind of a weird series of trades.