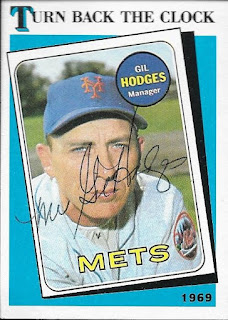 Joe Buck mentioned her during the World Series broadcast, so I took a chance and sent these two cards to Joan Hodges, widow of Gil Hodges. I figured it was worth a shot, since what I was sending was the above 1989 Topps Turn Back The Clock and the below 1972 Topps checklist. I was excited when I got them both back signed. 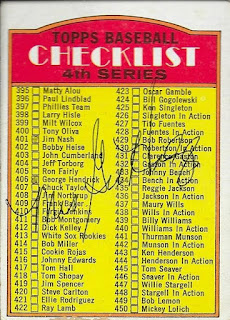 She signed both "Mrs. Gil Hodges", and they look pretty cool.

Hodges appeared on the Hall of Fame ballot a maximum of 15 years (from 1969 yo 1983), where he received as much as 63.4%. This is the highest vote % for anyone who did not eventually get elected to the Hall.

Posted by William Regenthal at 9:10 AM

that's pretty great. i also heard hodges being mentioned during the series, and was surprised to learn that tom verducci is his nephew.