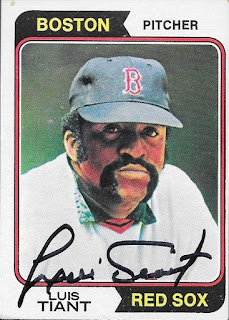 I saw that Luis Tiant was signing TTM, so I jumped on the chance to add more signed cards of his to my autograph album.  I had gotten Tiant at the National a couple years ago, and my buddy, Gerard sent me some signed cards a while back, as well.  Also, my friend, Drew, sent me a Tiant signed ball way back when. 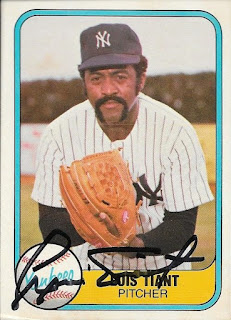 So, I found two cards that Tiant hadn't signed, and sent them on their way.  The above 1981 Fleer turned out really well.  I don't have many from that set in my album, so it was nice to add this one.  The card at the top of the post is a 1974 Topps.  On both of the cards, Tiant is rocking an amazing mustache.  Can't miss it.

I mailed to Tiant on October 19 and got the cards back on November 2, for a 14-day TAT.

Posted by William Regenthal at 9:53 PM